"Elisabeth Smolarz probes the shift in expectations and slippage of memory experienced by East Germans in the two decades since the fall of the Berlin Wall in this insightful installation. The work explores the peculiar phenomenon of Ostalgie, a nostalgia for the "good old days" of the former East (Ost) Germany. Never mind that the good old days, with their limited food supplies, inadequate housing, and staggeringly repressive police state were never really that great. The wholesale conversion of the Eastern Bloc to capitalist democracy was nothing short of terrifying and ruinous for those unable to adjust, and effectively wiped out governments that offered a real - if not always very pure or successful - Marxist alternative. Smolarz de-contextualizes once-common activities of the German Democratic Republic (GDR) through re-enactments, emphasizing the peculiarity

of the ideology that engendered them.

In the first frame is a man of about forty, blindfolded, dis- and re-assembling an AK-47 rifle - a task he learned during his required service in the armed forces of the GDR. The former soldier succeeds in taking the weapon apart, but is unable to return it to functionality, metaphorically failing as a citizen and a defender of his nation.

The second segment was filmed in the former New York residence of West Germany's Ambassador to the United States. In 1989, Hans-Dietrich Genscher, Foreign Minister and Vice Chancellor of the Federal Republic of (West) Germany and Eduard Shevardnadze, the Foreign Minister of the Soviet Union purportedly used the library to hold a secret meeting in which the future of the GDR was decided. The camera pans slowly around the empty room past two overstuffed leather chairs, where the terms and strategies for reunification were presumably discussed. Notably excluded from these talks was a representative of the GDR.

Like the wielder of the AK-47, the man in the third segment grew up in the GDR. Sheepishly, then proudly, he confronts the viewer while singing in Russian. In an effort to encourage loyalty to the Soviet Union, East German children were taught Russian in school and further exposed to its culture. The effect is tragicomic, as we witness a grown man reciting songs learned by rote, occasionally mispronouncing words or breaking off syllables in odd places, as they were often originally learned without full understanding." 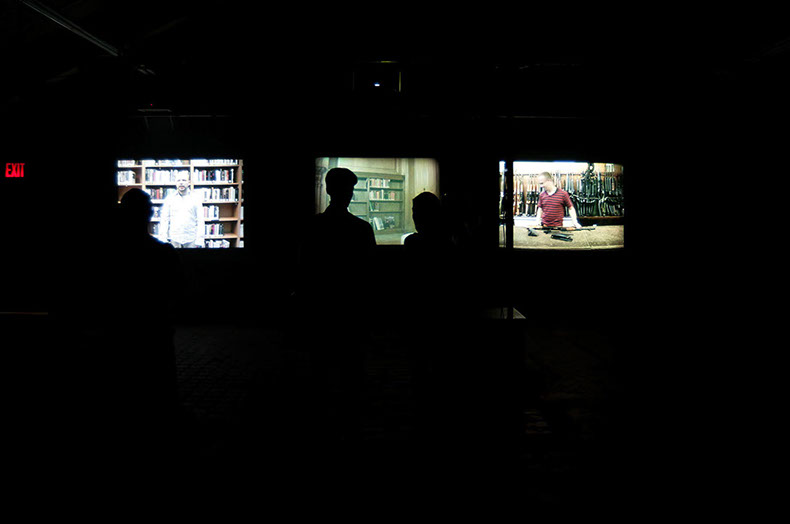 Ours: Democracy in the Age of Branding, Anna-Maria and Stephen Kellen Gallery, New York